LOVE AT THE EDGE OF SEVENTEEN

A YA Romance Anthology

From Stars and Stone Books 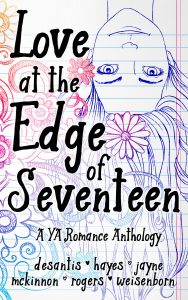 It’s never easy to go through the fraught transition into adulthood, but the teens in this anthology have more to deal with than most: super powers, magic, illness, prejudice against sexual orientation and gender identity, and even death. Fortunately, they all find love at the edge of seventeen. 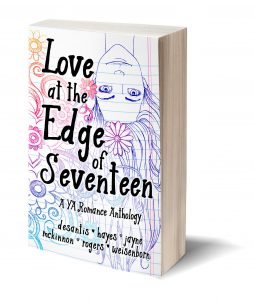 For our blog tour, we asked our authors to talk about their writing process. What’s their favorite part? Do they have a certain writing space? What about rituals or “unusual” requirements?

My favorite part is the revision (whatever number it may be) that results in the story being in its tentative final form. I usually come up with details as I go and have to fill in stuff at the beginning to match the end. I love seeing that happen and looking at what will be polished for publication.

I’ve recently moved back north. Thus, I now have a basement again. That’s where my shiny new desktop computer lives and, consequently, where I spend a lot of my time. I write down here in my cave because it lacks distractions. Also, I can literally say I’m going into my “writer cave.”

Rereading the final draft before submission. It’s satisfying to see the elements come together, and it’s useful to reread after you think the editing is done—because, as most writers and authors know, the editing is never done (not even when the story has been published! We all continue to edit in our own minds).

I tend to write in my office (which was once a garage but was converted into my own private writing space), since I can turn on my space heater and white noise machine, ignore the outside world, and focus on the world I am creating for myself and my readers. If, for some reason, I don’t want to write at home, I go to coffee shops. I’ve done some of my best writing at nine in the evening with a warm cup of coffee in hand.

I am a very boring writer, I suppose—I grab my MacBook Pro, find a quiet place, and get to the story I want to tell! However, if I have the chance to write near a body of water, that is where I prefer to be. I am called to bodies of water, so sometimes, I will churn out forty or fifty pages a day if I can sit outside on a dock, watching the water in the Chesapeake Bay lap gently against the boats beside me. It’s not a daily ritual, but I’m grateful for it when it does occur. Soon, however, it should become a daily ritual…

Having written is my favorite part. Sometimes I struggle to get words down on the page.

I used to write at the kitchen table, but now I’ve taken over my husband’s desk. We adopted a kitten this year and she likes to jump on my computer, so I’ve been exploring alternative writing spots. She’s more tech savvy than I am. She frequently takes screenshots and puts the computer into air plane mode.

I have a terribly broken process that involves reworking my story over and over before writing the ending. This year I plan to try writing a story straight through and only revising once the story is complete. One of the tools I plan to use is Write Or Die, which does very bad things when your output drops.

I really love the initial stages of a story when I’m outlining. I’m a plotter, and my outlines usually end up being about 10% as long as the finished story, and sometimes longer. I really work out the kinks in the story and with the characters there, although sometimes things surprise me as I start drafting. With this story, there were several places where I realized I didn’t need something I thought I would need, or where I’d missed something. But for the most part, I had a solid road map to write the story.

I write at my desk, in my “office,” which is really just a corner of a big open room that makes up the second story of my cape-cod style house. The other end of the room is my bedroom. Fortunately, we put a bathroom in the middle, so that blocks the sleeping end and I can stay up late writing after my husband goes to bed. I prefer writing at a desk on my desktop computer, because I like to sit in my ergonomic chair and feel like I’m “at work.” When I write on my laptop, even if I’m sitting at a table or desk, I don’t feel like I’m really working. It’s OK for short bursts, and I can sometimes get a lot done when I’m out at coffee shops or libraries, but nothing beats my desk for productivity.

I don’t think I do anything very differently from anyone else. I’ve been trying to use some planning software to help with outlining and keeping timelines and character traits straight, but so far, it’s all just in Word documents and Excel spreadsheets.

My favorite part is typing the end. Which I don’t exactly do, but you get the picture. I like to marinate it, then come back to edit.

As I said in an earlier question, I like to write anywhere the mood takes me. I like the change!

I do not have a ritual, unless you count having my tea, my tea warmer to keep it there for when the keys are flying and it would get cold, and maybe a dog or two with me.

Kylie Weisenborn, “Now I Am”

I like writing the first draft because I can just put whatever I want and plot holes, consistency, etc. doesn’t matter…yet, because everything is editable.

Mostly I write with my laptop on the couch. I have hopes that one day I’ll have a comfy enough desk to do it there, but I might be kidding myself with that one.

I try to keep the ritual kind of stuff to a minimum. I have an easy enough time procrastinating as it is, and I don’t need more excuses to do so.

About the author: wpadmin